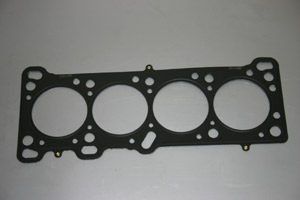 We have added some new items to our already existing lineup: new items for B6 STD bore and heavy-duty type for B6, BP turbo.
Our lineup now contains 11 types of metal head gaskets for Mazda Miata.

We added the 1.2mm type that’s convenient for the engine’s compression ratio’s adjustment.

We stopped the production of the 86mm x 0.6mm head gasket for BP.

New lineup for B6 STD bore

Up till now we were using the 81mm gasket with the STD (78mm)～81mm piston. However, many of our customers asked us if it wasn’t possible to lower the compression ratio. This is the reason why we changed the bore to 79mm.
The STD cylinder bore is 78.0mm. Using stainless material and pressing technique we make a bead.
The bead part generates stress on the head/block’s bonding surface and the sealing becomes better.
The contact pressure becomes uniform and we can get a stable holding power. Left image: Maruha metal (for BP 86mm)
With the bead we can keep stable sealing.
Right image: NA8 genuine gasket
At the first look there doesn’t seem to be any beading but the center plate is being processed into a bead state. To be able to resist the supercharger the stopper is a very important measurement to prevent blow-by.
The surrounding of the bore of the plate that bears the core of the gasket is bent back.

It is different from the grommet type. The stopper's bending occurs only on one side and the side where there is no bending becomes flat.
The bead is being adjusted to the flat metal part and the sealing is being controlled.
Because of the optimal ramp from the stopper the cylinder’s surrounding can better resist the contact pressure and the strength of the supercharger.
It is a gasket that aims for a turbo car’s long life.

The price of the metal gaskets used in tuning and the genuine ones' has been stabilized thanks to mass production.
It is very convenient because of the thermal conductivity of the metal, too.
The heat cannot accumulate easily and the heat from the combustion chamber is being smoothly conducted to the block side and blow-by caused by melting can be prevented.
The plate on the top of the bead produces a more stable sealing effect thanks to the repulsive force. If we pile them up we can get a good compression ratio and we can preserve the squish’s clearance. Genuine gasket for B6
Carbon sheet base with a grommet
The bore is over 79.5mm, it is not meant for tuning.